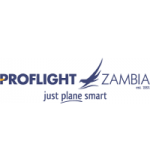 The airline will operate on Mondays, Wednesdays, Fridays and Sundays, with the addition of twice-weekly cargo flights departing from Lusaka on Tuesdays and Thursdays. Proflight becomes the first in Zambia to ferry passengers and cargo to The City of Gold under the ‘new normal’.

The first Lusaka-Joburg flight, scheduled for October 1 is already receiving overwhelming response from the public.

On Fridays and Sundays P0024/25 leaves Lusaka at 12h00 arriving in Johannesburg at 14h00. The return flight leaves at 15h00 and is back in Lusaka at 17h00.Additional days will be added when demand increases and the airline will look at re-introducing direct Ndola/Johannesburg and Lusaka/Durban flights at a later date. Eligibility to enter South Africa is subject to the South African COVID-19 entry regulations once they are released in the coming days.