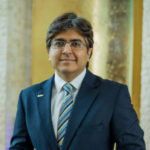 The Radisson Blu Anchorage Hotel, Lagos, V.I. is pleased to announce the promotion of Ahmed Raza to General Manager as of 1 September, 2020.

Joining Radisson Blu Anchorage Hotel, Lagos, V.I in 2017 as the Executive Assistant Manager, Ahmed brings over 15 years of widespread hospitality experience to his new role. His new responsibilities include overseeing the complete operations and management of the hotel alongside the senior leadership team.

Ahmed held various leadership roles with brands such as the InterContinental Hotel Group, Marriot, Movenpick Hotel & Resorts and Hilton where he began his journey in 2005 within the Hilton Houston Hotel’s F&B department.