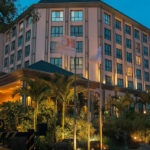 BACKGROUND: Crowne Plaza Nairobi opened in 2010, back when there was a dearth of internationally-recognised hotel brands in the Kenyan capital. Nearly a decade on and it has been joined by a fair few, including Radisson Blu, Kempinski, Pullman, Moevenpick and ibis Styles. A second Crowne Plaza opened near Jomo Kenyatta International Airport last year.

WHERE IS IT? Upper Hill, known as the city’s financial hub, is where you’ll find the regional headquarters of the World Health Organisation, the African Development Bank, Citibank and the World Bank, as well as various embassies and offices.

ROOMS: There are 206 rooms that come in various categories and styles. There are Superior rooms with a king-sized bed, Standard rooms with two queens, Executive Suites with a separate lounge area, and then larger Presidential Suites. All rooms have desks, armchairs, safes and tea/coffee-making facilities. I stayed for one night and found my Executive Suite comfortable, enjoying a nice bath. There are distinctive Crowne Plaza touches such as a pillow menu and a lavender sleep spray next to the bed. The wi-fi was fast and easy to connect to, and there was a bowl of fresh fruit on the dining room table. There were also large windows with good views, and a turndown service was carried out while I was having dinner. My TV remote wasn’t working, but I didn’t actually want to watch TV anyway so didn’t ask to get it fixed. The screen was surprisingly small given the cinema-like proportions that most hotels offer these days, though this wasn’t a problem for me.

BARS AND RESTAURANTS: Alabaster Coffee Lounge, in the lobby, serves light meals, pastries and drinks. Baraka Restaurant serves the morning breakfast buffet, a buffet lunch and a la carte dinners. Breakfast starts at 06h00, and though I had to leave before that to catch a flight, staff offered to prep me something in advance (I don’t like eating in the early morning so declined). On a side note, though this is far from an airport hotel, the reception contains a useful board displaying live flight information. The night before I ate at Sikia Restaurant, which is dark and atmospheric but with bright local artwork on the walls. It was only me, a couple on a date and another person seemingly there on business, but it is the kind of space where you don’t feel conspicuous. Staff said the restaurant is usually packed on weeknights, when the hotel is a lot busier. The food and beverage offering has recently had a refresh under a new manager, who has placed an emphasis on international wines and meats. There are also local dishes such as a tasty Red Snapper in white wine sauce, which I opted for. It’s a good, wide-ranging menu, with affordable vegetarian options such as risotto or pasta parcels, and pricier dishes including lobster thermidor and prawns masala. Accessible from reception is the two-storey bar/ lounge which is open from 10h00 till ‘late’, serving beers, wines and spirits. A resident pianist plays in the evenings.

BUSINESS FACILITIES: There is free, fast wi-fi throughout the property and a desk in every room. When it comes to meetings and events, this is clearly where the hotel is in its element. There are 11 rooms across a total 800m2, the largest of which can fit 550 people, or 300 for a banquet. To the left of reception are the big ballrooms, while the smaller meeting rooms are tucked away further into the property across different floors.

LEISURE FACILITIES: There is a large two-floor gym which is staffed between 06h00 and 22h00, although you are able to get in on request at other times. It’s open to non-guests and apparently popular in the early morning when members will use it before work, since they can get into the city centre and beat the traffic. Upstairs are changing rooms with showers as well as a few rooms which can be booked for beauty treatments and massages. There is also an outdoor pool.

VERDICT: A classic Crowne Plaza, and a very nice one at that. Staff are friendly and accommodating, the rooms are large and there are lots of dining options as well as a good gym and pool. The kind of hotel you wouldn’t really need to leave.