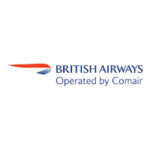 BACKGROUND: British Airways is operated in southern Africa by Comair and flies daily between Johannesburg and Victoria Falls in Zimbabwe. The outbound flight leaves O.R. Tambo International Airport at 11h25, arriving at Vic Falls Airport at 13h05, whilst the return flight departs Zimbabwe at 13h55 and arrives in Johannesburg at 15h35. Comair uses a Boeing 737-800 on this route.

CHECK-IN: We flew the first day of the SAA strike, so no surprise that our flight was full and there was a long queue at check-in. I had, however, checked in online, which you can do 24 hours in advance, so all we needed to do was drop bags. However, that queue was also long and I look forward to the day airlines can come up with a quick and seamless solution for simple bag drop. Incidentally, check-in was at Terminal B (domestic), after which you make your way to immigration and International Departures.

LOUNGE & BOARDING: Comair’s SLOW lounges have built an impressive reputation and for good reason. They are well-run, comfortable, are stocked with good food and coffee, the wi-fi is speedy, and there is enough reading material, if you’re not buried in your laptop. This experience was no different, despite the lounge being full. My only regret was missing out on the delicious-looking quiche, although my waistline thanked me later! The lounge doesn’t call flights, so we kept an eye on time and made the 10-minute walk to gate A22, with plenty to spare. When we got there, our flight was already boarding, early, so we took advantage of priority boarding, which didn’t really count for much, ultimately, as we needed a bus to get to the aircraft and were soon joined on it by economy class passengers. After a short trip, we all boarded and were quickly offered a drink and hot towel in business class.

THE SEAT: The business class cabin consisted of 24 seats. Seats were in a 2-3 configuration, although in the first row the configuration was just 2-2. I changed our allocated seats when I checked in online, as my wife wanted a window seat and me an aisle, so the best options were the two seats in row 4 on the left flank, if you’re facing the front of the aircraft.

BEST SEAT: I was pretty happy with our seats, as they were roughly in the middle of business class, away from the galley and the transition to economy. That being said, on our return leg, we were allocated row 1 seats in the front right corner of business class, which offered even more legroom (useful for tall people, like me), as long as you don’t mind being close to the galley.

THE FLIGHT: We boarded on time, but only took off roughly half an hour late, after spending some time on the tarmac, which I don’t recall being explained. We were quickly offered a drink and, after initially opting for water, I decided to treat myself to what proved to be a glass of delightful Chenin Blanc, which was followed by a snack of peanuts. Thereafter, I had one of the most delicious vegetarian pastas I’ve had for some time – and I’m no vegetarian! It just looked more appetising than the meat option and I didn’t regret my choice, which was followed up by cheese and biscuits and a small chocolate bite of sorts. It’s not often you’ll catch me raving about airline food, but this was the exception and a nice change. Our tray tables were cleared away rather quickly and we were offered a top-up, which I gladly accepted, before settling into my book.

ARRIVAL: Despite taking off nearly half an hour late, we landed only five minutes after the scheduled time, which I thought was pretty impressive. The benefit of being in business class meant we could beat the queue at immigration, which took shape soon after we were speedily through. I had a little bit of a wait for my luggage, but it allowed me some time to cast an eye over the shiny and relatively-new Vic Falls Airport, which opened four years ago.

VERDICT: Despite the longish wait on the tarmac before take-off, a fairly seamless experience, which was no mean feat, considering the full flight and the knock-on effects of the SAA strike, and flying BA also means you get to take advantage of the SLOW lounge, which is always a treat.